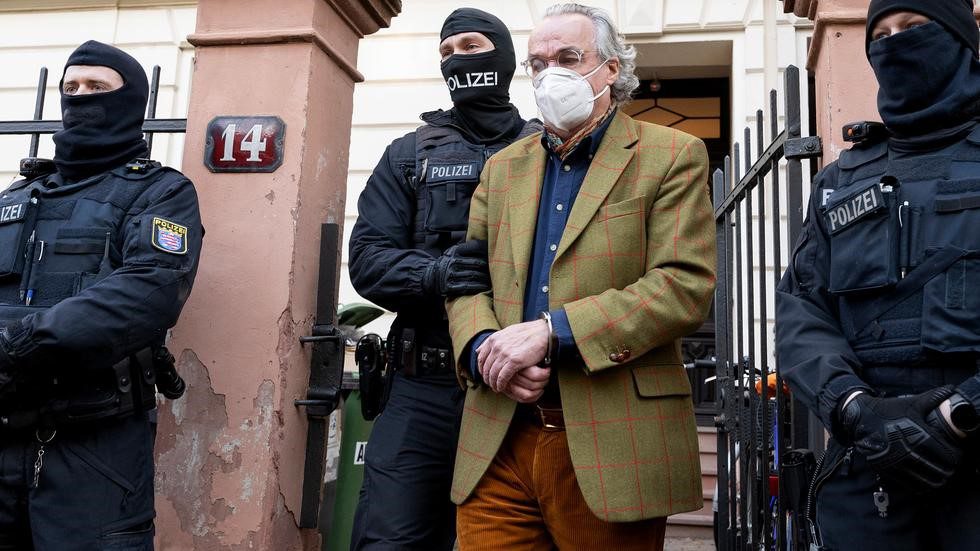 What is the Reichsbürger Movement Accused of Trying to Overthrow the German Government?

Police have arrested 25 people accused of planning to overthrow the German government in a series of raids across the country.

The group is accused of trying to instate Heinrich XIII – a descendant of German royalty – as their leader. Among those arrested were members of the Reichsbürger (which translates as citizens of the Reich), a disparate movement of groups and individuals, including some with extreme-right views.

Reichsbürger adherents have been stopped from attempting violent action before, but this latest incident and its alleged members have caused greater concern.

A former member of the German parliament, who was also a judge until shortly after her arrest, was among the group. Birgit Malsack-Winkemann was a parliamentary deputy for the far-right Alternative für Deutschland (AfD), but left the party in 2021.

Several former soldiers were also arrested in connection with the coup plot. This is a cause for great concern for law enforcement, as such ties give possibly dangerous extremists access to weapons and trained individuals.

Earlier in 2022, Heinrich XIII was reported in the German press as being close to the Reichsbürger scene and a believer of conspiracy theories, prompting his family, the House of Reuss, to publicly distance themselves from him.

He does not, however, have a high profile, apart from a 2019 speech at the WorldWebForum conference in Switzerland, which contained an anti-Semitic and historical revisionist message. The involvement of an aristocrat speaks to the monarchist motivations of some Reichsbürger, who wish to reinstate a Kaiser as head of state.

What do the Reichsbürger believe?

The Reichsbürger do not have a centralized structure but are estimated to have at least 21,000 supporters. Their key belief is that the current German state (the Bundesrepublik or Federal Republic), its institutions and democratically elected representatives are not legitimate.

Supporters of the movement refuse to adhere to state authority, such as by paying taxes. They became notorious in the early years of the pandemic for refusing to comply with COVID-19 restrictions.

Some adherents to the movement consider that official German passports and ID cards are illegitimate. While some prefer to use an official certificate of citizenship (called a gelber Schein or yellow certificate), others manufacture their own illegal passports and driver’s licenses. These will often include former German states as places of birth, such as the kingdoms of Bavaria or Prussia. In 2021, a German civil servant was removed from office after he applied for a passport with the Kingdom of Bavaria listed as his birth state.

Members of the group generally believe that some previous version of the German state is in fact the legitimate form – though there is some inconsistency as to which.

Some supporters believe Germany’s true form existed between 1871 and 1918, when the German Reich was established following unification and before the first world war. Others cite the constitution of the interwar Weimar Republic as that of the true Germany. And others still focus on 1937 to demonstrate what they perceive as the legitimate boundaries of German territory, which then included the former Kingdom of Prussia, now Poland and Russia, but not Austria, which was annexed in 1938.

They sometimes refer to it as Deutschland GmbH (Limited), implying it has no power over itself and exists only to enrich its controllers. The name BRD GmbH is also used, referring to the abbreviated name for post-war West Germany.

The focus on historical revisionism and erasure of German sovereignty can encourage a conception of Germany as a blameless country with uncomplicated pride. By focusing on pre-war borders and overlooking post-war history, the Reichsbürger can ignore Germany’s defeat in the second world war, as well as its process of coming to terms with its Nazi and colonial past, notably the Holocaust and the 1904 Herero and Nama genocide in Namibia. The removal of these dark moments in German history enables the movement’s supporters to focus on their own perceived victimization as subjects of a German state which they do not recognize.

A similar revisionism is common in the wider German far right, notably some members of the populist AfD party. Repudiation of the Holocaust’s importance and an emphasis on “positive” moments in German history encourages Holocaust relativisation and antisemitism.

However, unlike the AfD, which has adapted its rhetoric to fit into the political mainstream, some Reichsbürger followers entirely disregard current German laws banning Holocaust denial and the dissemination of Nazi propaganda. The group is linked to overt antisemitism and the spread of antisemitic conspiracy theories about the power of “high finance” as well as outright Holocaust denial. In March 2020, German police seized neo-Nazi propaganda during raids on the homes of some Reichsbürger members.

However, the historical revisionism can confuse the picture. Although many of its adherents are anti-Semitic and glorify the colonial past, the Reichsbürger is not specifically defined as a group of right-wing extremists. In truth, only a small portion of the movement can be defined as such.

At its core, right-wing extremism is largely defined as anti-democratic. While many Reichsbürger refuse to endorse the legitimacy of Germany’s current democratic state, the lack of unified vision within the movement makes it unclear which system would be preferable, the constitutional monarchy of Kaiser Wilhelm II, the democratic experiment of Weimar Germany or the dictatorship of Nazi Germany. However, in the case of the most recent plot, the key role of Heinrich XIII implies that the goal was the restitution of a constitutional monarchy in the style of Kaiser Wilhelm II’s regime.

Some Reichsbürger followers are evidently beginning to engage in political violence. The latest arrests follow multiple other incidents. In 2016, a police officer was killed during a raid on a member of the movement’s illegal collection of weapons. In August 2020, members of the Reichsbürger attempted to enter the German parliament as part of a protest against COVID-19 restrictions.

The presence of former military figures and a former parliamentarian among the most recently arrested group suggest the Reichsbürger are not without potential influence. The AfD has long denied any links to the movement, but has been shifting further and further to the right in recent years. In 2019, the German interior ministry reported that it had identified some isolated connections between the Reichsbürger and the AfD.

The Reichsbürger could be viewed as a fringe group but their ideas clearly appeal to some enough to convince them a coup is a worthwhile undertaking. And links to more influential organizations would make them more dangerous – which is why this matter has been taken so seriously by the authorities.